To our lovely Marimeta parents,

Second session has been red hot… Literally! Not only has it been over 80 degrees and sunny everyday, Red and White competition has just begun! Here’s how they announced:

It all began Wednesday night during the evening activity. We were playing a new game, Marimeta Girl. For those who know the chocolate game, it was a variation of the game. Camp was divided into smaller teams with one senior cabin girl on each. Campers were given a comic book titled Marimeta girl. The comic book was beautifully designed by one of our media directors, Laura Dewing, featuring a brunette Marimeta Girl on the hunt for her missing superhero costume. Following the directions of the book, everyone was sent around camp retrieving the lost clothing. Finally, the senior cabin girls were dressed in the collected pieces.

When the game ended, two counselors came running out of the lodge. Turns out, they had “left behind” the final page of the comic book.

“Oh No! I’ve forgotten one more thing, my super mask!!! I need everyone’s help to find it this time!! Go back to your own cabin and find your counselor for further instructions!!!!!”

After every camper had found their mask, they all sat down waiting to find out the overall, co and little captains of each team. Each member of the staff then belayed down from the course showing off the cape on their backs. The capes read the names of the overall captains: Drew of the white team and Reese of the red team!!

The girls cheered on their friends as the captains names were read. As each name was read, the captains were tackled with hugs and excitement from their friends! The cheers could be heard all the way from Camp Ojibwa down the street!!

What an exciting night we had. Now the session truly starts; Red and White is in full swing and tonight we will be playing our first round of Capture The Flag, a fan favorite!!

We are so lucky to have all of your beautiful girls with us for the summer! We promise to give them a kiss and hug from you all. More to come! 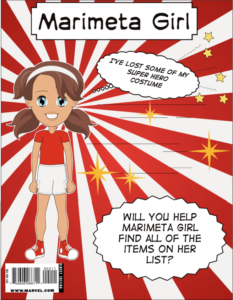