The 4th of July is so much fun at Camp Marimeta!

For many campers, Independence Day is their favorite day at camp. Here’s a quick breakdown of our incredible 4th of July:

We start the day with a short sleep in, until Senior Cabin wakes every camper up by going through the cabins banging pots and pans… a special Marimeta tradition!

After getting completely decked out in red, white, and blue gear, the girls gather in the middle of the field for a particularly spirited raising of the flag. We ate croissants for breakfast and then cleaned our cabins while jamming out to American classics.

The morning was filled with an activity called Captains Duels. Each captain on both the Mari and Meta teams battle one-on-one in a water balloon fight. The ultimate goal is to get their opponent completely soaked in water! While these duels are very competitive, the captains always start and end their fight with a supportive hug. They were so much fun!

Next, we enjoyed our annual 4th of July barbecue! The kitchen staff prepared an outstanding meal of bbq chicken and brisket sandwiches, Texas slaw, baked beans, corn on the cob, potato salad, and a camp favorite: corn muffins!

Following lunch, the girls played Message to Martha! This game is played every single summer on the 4th, and is loved by all campers! In this competition, the goal is to run from one side of camp to the other without being sprayed by water. One team is on offense (running) and the other is on defense (spraying water). The senior cabin members on both the Mari and Meta teams worked tirelessly to develop a strategic plan to get the most girls on their team across camp without getting sprayed. What fun!

In addition to Message to Martha, Senior Cabin led the rest of camp in a special Marimeta tradition: a rattlesnake!  A rattlesnake is a spontaneous activity where the entire camp grabs hands and runs into the lake no matter what they’re wearing. It’s such a fun way to cool down after spending so many hours hanging in the hot sun!

To end the day, the boys from Menominee will come over to camp for a social! Monster Entertainment will also join us with loud speakers and fun music. We’ll dance the night away while also getting to see our brothers, cousins, and friends at Menominee. At the end of the night, we’ll sit down at the waterfront and watch an amazing firework show! It’s the perfect end to such an exciting day! 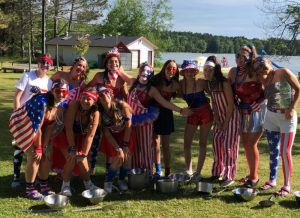 Senior Cabin with pots and pans! 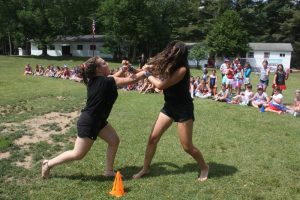 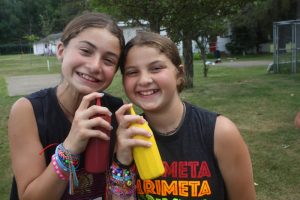