Learn about where Camp Marimeta’s oldest campers go for trips. 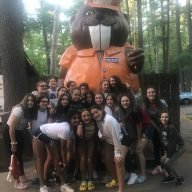 At the entrance at the Tommy Barlett Show 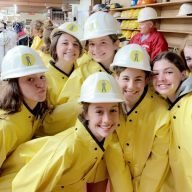 On the way to Mackinac Island! 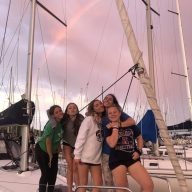 Camp Marimeta’s oldest campers (we call them pioneers) have the privilege of going on some amazing trips. Marimeta goes to Wisconsin Dells, Mackinac Island and sailing on Lake. Moreover, they get to learn about the beautiful Northwoods.

The girls going into 8th grade had an amazing time in the Wisconsin Dells! After a quick 3 hour bus ride, they arrived at the Dells and checked into Hotel Rome. Next, they enjoyed some pizza for dinner and then went to the famous Tommy Bartlett Ski show! The show features a mix of extreme water skiing and dare devil stunts. Finally, they end with the entrancing water show.

The next day, the girls woke up early and headed to Noah’s Ark Water Park, the biggest water park in the country! They spent the day going down water slides and hanging out in the wave pool. After that, they walked around in town and enjoyed shopping and getting a bite to eat. The morning after, the youngest pioneers headed to Mount Olympus, an amusement park located near the Dells. They rode many roller coasters and had a blast! Finally, the girls hopped back on the bus and headed back to camp. The Wisconsin Dells trip of 2019 was incredible!

The middle pioneers, going into freshman year of high school, took a trip to Mackinac Island! Mackinac Island is a small (8 mile in circumference) island located in Lake Huron. In fact, the film “Somewhere in Time” was shot on this island.

These girls left camp and buckled down for an 8 hour bus ride to their destination. On the way, they stop for a quick tour through the Iron Mountain Iron Mine. Once they arrived in Mackinac City, Michigan, the girls checked into their hotel and then went to eat and shop around in the city! The next morning, the girls wake up and hop on the ferry that takes them over to the island. Mackinac Island is so small that there are no cars allowed, so people commute by horse and bike. The middle pioneers spent the day biking around, eating lots and lots of fudge, and shopping on the island.

The next day, the girls woke up early and hopped on the bus to head back to camp. On the way back, it is a tradition that the middle pioneers stop at The Mystery Spot, a small tourist attraction located in St. Ignace, Michigan. What happens at the Mystery Spot is a huge secret at camp, so we can’t tell you what the girls did there, only that they had so much fun! The campers slept the whole way back, and arrived at camp just in time for dinner!

*Learn more about The Mystery Spot

As the oldest pioneers in camp (going into their sophomore year of high school), these girls enjoyed a three day long sailing trip! The senior cabin trip is one that the girls look forward to for many, many years as younger campers. Leaving before breakfast, SC’19 hopped in the camp vans and drove to Port Superior, a marina located in Bayfield, Wisconsin. They spent the first day getting settled on their boats, watching the beautiful sunset, and shopping a little in the town of Bayfield.

The next morning, they woke up early and got ready for the long day of sailing ahead! They spend the next two days relaxing on the boat’s deck, getting a nice suntan, and cooking meals with their boat mates!  Senior Cabin sailed all around Lake Superior, stopping at Madeline Island for some shopping and Ice Cream, and anchoring down at lunch to take a cold dip in the Great Lake! After two long days on the boats, the girls head back to camp excited to shower and to sleep in their own beds! It was a another great year on the sailing trip!