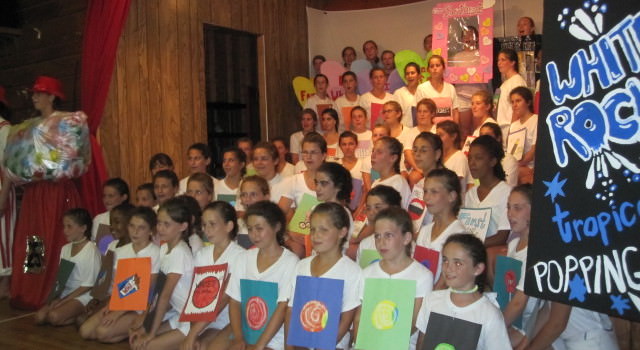 While we usually post a Weekend Recap on Monday, we decided to write a special post about a big event occurring at Marimeta this evening: The Red and White Sing. Yes, The Sing is here! In the past couple weeks, it is likely that the word “Sing” has appeared in some of your daughter’s letters home. In previous Letters to the Lodge, we have briefly talked about the great deal of practice and preparation that goes into making this event a success. However, you are likely wondering what exactly is this thing. We now bring to you, “The Sing 101”: a crash course on the sights and sounds of the Red and White Sing.

The Competition: Throughout the session, each team has been extremely invested in the planning of the Sing. As one of our biggest Red and White events, both teams are striving for a win. Tonight, each team will have the opportunity to present their Sing performance in front of the entire camp. The Lodge will score each team based on presentation, delivery of song set list, behavior as an audience, and team transitions. Win or lose, the Sing celebrates the spirit and teamwork that has been alive for the past 69 years of tradition.

The Singing: As its name suggests, The Sing is an event that puts rhythm and harmony on the frontlines of team competition. Prior to team announcements, the Senior Cabin selected a song set list for both the Red and White team. The set list had to include a theme song, peppy song, slow song, and team song.

The theme song – the theme song is an original song written by the Red and White captains and Senior Cabin spirit leaders. After choosing a theme for each team, the Senior Cabin works together to come up with a creative tune and lyrics, aligned with their selected theme. The theme and theme song are two of the most well kept secrets in camp. The Senior Cabin stresses the importance of keeping the themes a secret until the moment they walk through the Rec Hall doors, tonight. We will let you in on the secret early by announcing the Sing themes for 2015… (drum roll, please) Red Fashion Show and White Wedding! The tunes for the songs are Summertime Guys for the Reds, and In Too Deep for the Whites. Each team will perform their theme song as they walk in and walk out of the Sing.

The peppy song – Following the theme song, each team will perform their peppy song. The peppy song is a traditional Marimeta song that reflects the team’s love and appreciation for camp. As both teams would say, this song is sung with “lots of pep and zest.” This year’s peppy songs are, “We are Marimeta girls and we want to say hello…”, for the Red team, and “We have a camp like no other camp…”, for the White team. The peppy songs are performed with a lot of energy, enthusiasm, and smiles.

The slow song – Following each team’s peppy song, the teams sing their slow song. Historically, the slow song has been selected from various sources: Marimeta campfire songs, mainstream music, movies, and musicals. The song’s lyrics are extremely sentimental and meaningful to all campers. Legend tells that the goal of the slow is song is to make Sandy and Terry cry. Moreover, the song is delivered in a slow, emotional manner. This year, both the Red and White teams will be sharing their slow song, which is extremely special. The song is called, “What We Came Here For” from the Disney movie Camp Rock.

The team song – Lastly, the team’s will perform their team song. The team song is a previous theme song. Team songs are sung in the mess hall, daily, and serve as a team’s legacy. We sing team songs from the past 69 years of Red and White tradition! This year’s team songs are “Red Bells are Ringing” and “White Team Fantasy.” Fun Fact: “Red Bells are Ringing” is actually the theme song from Katie’s mom’s Sing, when she was an Overall Red captain – how cool!

The Movements: As part of Sing tradition, there is a customary set of movements that each camper learns prior to their team’s debut. These moves serve as transitions, between songs, and also highlight the team’s togetherness.

Entrance and Exit: In one of the first Sing practices, the captains organized their team in height order. Once arranged, each camper is assigned a partner that they will enter and exit the Rec Hall with. Tonight, each team will line up outside the Rec Hall with their partners. Each partner pair links their inner arms, together, and leaves their outside hand in “fours”, which placed down by their side. Once the captains cue their team, each pair begins to walk into the Rec Hall. The girls even try to step with the same foot, in order to be totally in sync. The teams both enter and exit in this fashion. The walk-in and walkout is one of the most iconic features of the Sing!

Ups and Downs: Ups and Downs are movements that are used strictly for transitions. They’re one of the most worked on components of the Sing, because the whole team tries to perform these movements in unison. There are three levels of Ups and Downs that the captains teach their teams. It takes a great deal of cooperation and collaboration to perfect these motions – the girls work extremely hard!

Turns: Turns are an exit transition that the teams use to leave the Rec Hall. When prompted, the entire team pivots outwards…at the same time! Once turned, the teams begin to walk out.

Captain’s Cues: Prior to the Sing, the captains prepare a set of cues that are used for various purposes: starting songs, performing ups and downs, etc. The cues are memorized by the captains and are recited in front of the entire camp. They are usually written in rhyming fashion.

The Costumes: The costumes for the Sing are one of the most captivating parts of the performance. The Senior Cabin works tirelessly to craft costumes for the entire team. Using an array of materials, they produce, truly, professional costumes. The costumes reflect the team’s theme.

Captain Costumes: Every pioneer captain designs a costume that is larger than life! These costumes are usually the main symbols for their team’s theme. This year’s captain costumes are:

Top Row: The Top Row is composed of the Senior Cabin girls and a few campers of taller stature. These costumes are also elaborate and usually involve a lot of glitter. The two centers of the row are the campers who have been here for the most amount of years. This year’s top rows are:

Bridesmaids and Maid of Honor + Groomsmen and Best Man

We know that was a lot of information, but we hope you gained a comprehensive insight of the Red and White Sing. We are all so excited for tonight and cannot wait to see what the teams have put together! We will be posting pictures later this evening!

P.S: Here is a throwback to some of our most memorable Sing performances, these past couple years. Enjoy! 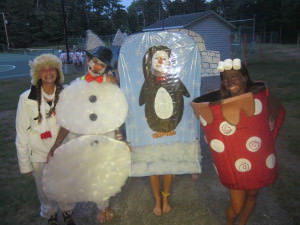 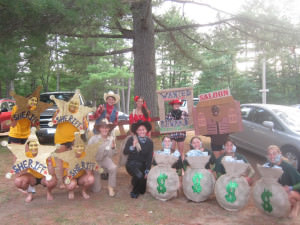 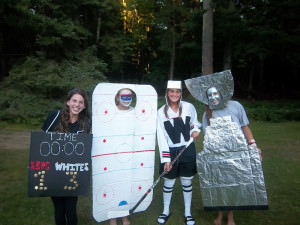 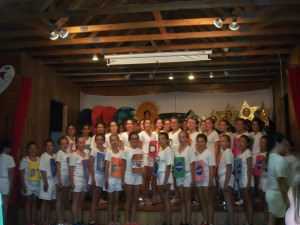 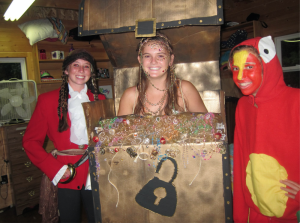 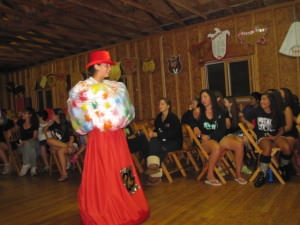 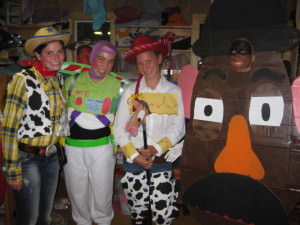 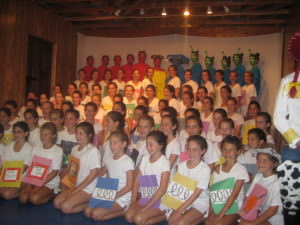