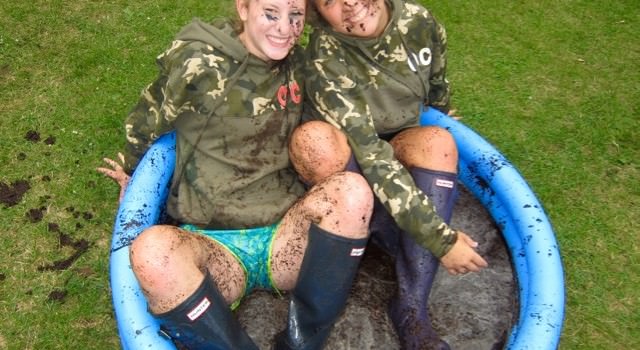 And now for your Weekend Recap…

Good afternoon! We cannot believe we only have two days left of Summer 2015. Our last weekend at camp was one of the most looked forward to of the summer. With the Sing and AC Relay, your girls savored the final moments of their Red and White competition.

The Sing was a huge success. Both the Red and White teams performed with poise, spirit, and smiles. Their dedication and practice shined through Saturday night! After an extremely close score, the Red’s Fashion Show came out on top! Congrats to both teams – your daughters endless hard work, truly, paid off!

On Sunday, a well-deserved sleep in, for the majority of the camp, was appreciated by all. However, a huge round of applause goes to our Marimeta Milers who closed their year’s running season with a 4 ½ mile run around the lake. They celebrated their hard work with a brunch at Donna’s Diner. Bravo to our Milers!

After our final Sunday brunch of the summer, both Red and White teams headed to team meetings. Preparing for the approaching All Camp Relay (AC Relay), the captains assigned each camper to various relay events.

The All Camp Relay is one of the most anticipated events of Second Session. Both teams must complete 30 different relay events plus a captain’s event. Some of these events include: a hot dog toss with kitchen tongs, sorting snail mail, roasting a s’more at Wilderness Point, a three-legged race, and kick the can down the road. In order to proceed to the next event, the captain must run the official competition baton to the next location. The relay events cover the entire span of camp. The AC Relay is an intense competition that depends on everyone’s participation and cooperation.

To finish the relay, the captains face off in a fierce head to head, timed, competition: winner takes all. For this year’s event, we stuck with our army theme and created a one of a kind boot camp obstacle course. After the entire team completed a round of jumping jacks, the captains sprinted to the obstacle course stationed in the middle of the field. Hurdling over benches, hopping through hoops, and crawling under nets, the captains tested their endurance and agility.

The final moments of the Relay were neck and neck. With Emma and Katie seconds apart, they both scrambled out of the mud pit towards the finish line. The race was so close that the teams waited with baited breath for the official verdict. A three second gap favored the White team! Congrats to both teams on a fantastic day!

After our last cook out and Sunday movie of the summer, we told the entire camp that we would be going to bed. As we began to play TAPS, we quickly cut the music to let the whole camp know that we were playing Stalk the Lantern! An explosion of noise erupted throughout camp. Played only once per session, your girls have been looking forward to this night for weeks.

Stalk the Lantern is a Red and White event that occurs after TAPS. Camp is set up like one giant target, with counselors in chairs outlining point zones. The “bulls eye” is the middle of field, with Lodgies serving as the lantern. The objective of the game is to make it past each point zone without being spotted by the lantern. If a Lodgie’s flashlight spots a camper, they must stand up, walk to the nearest point zone and collect their score. It was a night of stealth and fun!

After a long and exhausting weekend, the entire camp went to bed knowing their perseverance, teamwork, and spirit brought their Red and White teams even closer to the grand prize.

Today, we are competing in a daylong Olympic competition. Throughout the summer, Olympic teams have played various sports to gain medals. However, today’s events are slightly different. The JC’s will be refereeing around 15 different athletic competitions. Some of these include: tube rodeo, tug a war, 100 meter dash, egg toss, long jump and more! We will end our 2015 Marimeta Olympic Game with closing ceremonies, beside Lake Meta, this evening. After, we will be showcasing our 2015 Highlight Video – we are so excited!

With only a few more days left, camp is winding down but your daughters’ spirits are as ever high! Have a great rest of your day.